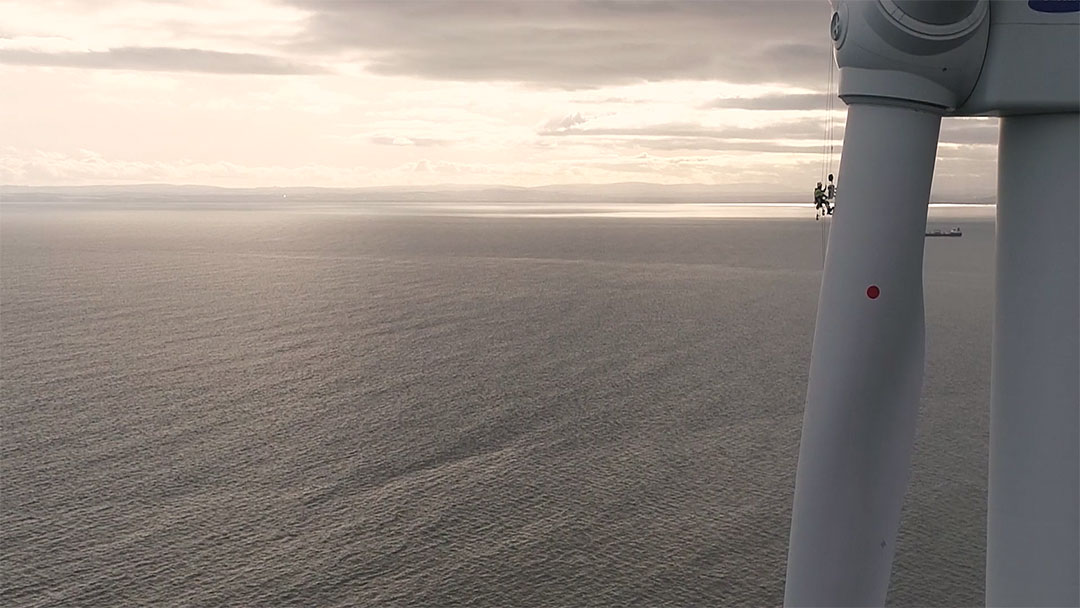 Over the past few years, engineers have been trying to prove that robots can repair offshore turbines. Through recent efforts on the MIMRee project they have successfully done this, and HT has been at the heart of capturing their progress.

Testing has taken place up and down the UK. From ORE Catapult’s demonstration turbine in Levenmouth, to their facilities in Blyth, and even the Royal College of Arts Robotics Laboratory in London. Using the latest gear, we’ve been able to follow their journey every step of the way.

The project brings together innovative robotics to scan, assess and repair damage to wind turbine blades.

First, an autonomous vessel scans the moving blades for any defects. The vessel, developed by Thales, is equipped with a camera that assesses the blades as it transports drones and robot repairers.

If any cracks are detected, the turbine is stopped and a drone is deployed from the vessel. It carries a six-legged ‘bug’ robot up to the blade where it attaches itself and begins detecting fractures.

The BladeBUG crawls along the blade like an insect and can feel cracks through its artificial skin. This uses bio-nanotechnology developed by robotics company Wootzano, which gives robots a sense of touch.

When the problem is located, the bug can deploy a repair module to fix the blade.

Filming a project like this obviously needed specialist techniques and equipment. We have extensive experience in this area, and always ensure we’re up-to-date and capable of keeping up with the industry.

We use our latest 4K camera for all ground filming and interviews. Additionally we film in S-log. This makes the raw footage look grey and dull, but gives us a lot more control over the colour grading in the edit. Dave is able to emphasise certain colours to achieve the desired look, whether it be for stylistic or branding purposes.

Three-point lighting and relevant backgrounds are also included in the interviews to make them as engaging as possible. Combining this with 4K quality and S-log shooting allows us to bring the most to films in this project.

Our drone also comes in very handy. Naturally a lot of the testing happens on turbine blades, high up from the ground. A ground camera could zoom in but would still likely miss some key detail, and simply wouldn’t look as engaging.

For example, during the tests on the Levenmouth Demonstration turbine we were able to use the drone to great effect.

Also capable of 4K filming, our DJI Phantom 4 pro was able to capture some stunning establishing shots. We could also achieve various, up-close angles of the robot crawling along the blade. You can see some of the footage for yourself in the video below.

Likewise, our GoPro and 360 degree GoPro Max are very effective. They are small and light enough to be attached to robots, giving us a unique perspective from their point of view. The 360-degree camera also allows for great flexibility.

Both cameras are also fully submergible so can even be used for underwater filming.

The MIMRee project isn’t done yet. There’s still a way to go before robots take over. We’re excited to see where their developments take them, and support all involved with great video content to showcase their efforts.

Watch this space for updates and MIMRee-related videos!

For now, check out these similar videos we have done for the companies behind MIMRee: